Can the Sterling Hold at Current Levels? 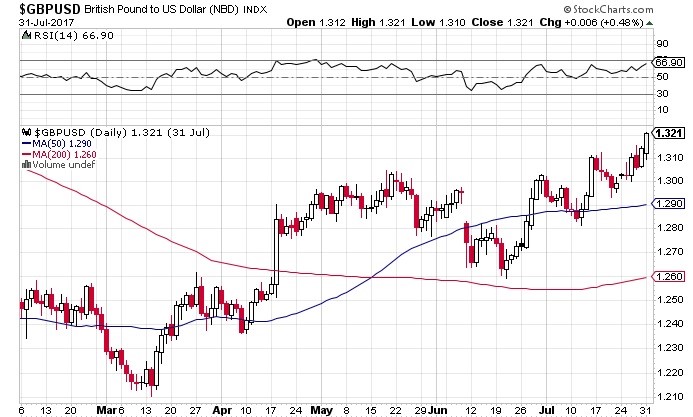 During July, this broad measure of the USD’s performance against 6 currencies (JPY, CHF, GBP, CAD, SEK, and EUR) shed 3.25%. The performance of the USD mirrors the uncertainty currently felt in the US political arena. President Donald J. Trump has been battling to get anything passed in the Senate, with Republicans and Democrats digging in their heels and refusing to budge on repealing and replacing the Affordable Care Act.

Prospects Ahead of Super Thursday Powwow

Weiss Finance expert, Montgomery Smyth is short-term bullish on the cable, and had this to say about its recent performance,

‘…While we have seen a notable uptick in the strength of the GBP, caution remains the order of the day. In the six weeks between 21 June 2017 and 1 August 2017, the cable has appreciated by 5.1%. The last time that occurred was 11 months ago in September 2016. Sterling strength is being helped by USD weakness, but neither points to a fundamental strengthening of the UK economy. Brexit -related concerns remain, and the UK’s negotiating hand has certainly been weakened after the general elections. The main concerns faced by Britons relate to rising CPI figures and weak wage growth. It remains to be seen how the Bank of England will address these concerns when it meets on Super Thursday.’

Meanwhile, currency traders are wasting no time pinning their hopes on an impressive sterling recovery. The GBP/EUR pair rallied on Tuesday, 1 August 2017, in the hopes of increased hawkish sentiment at the BOE. The August interest-rate decision is a big one, and pundits are anxiously awaiting Mark Carney’s statement. The MPC meeting on Thursday will wrap up August’s interest rate decision. Previously, a split vote of 5:3 in favour of retaining interest rates at the historically low 0.25% was adopted. A rate hike may not come to fruition, but sentiment of MPC members will be an important barometer of which direction the GBP will move.

Trading Above the Averages

Experts like Montgomery Smyth believe that even if 2 of the 8 Monetary Policy Committee members vote in favour of a rate hike, the GBP/USD pair could extend its rally. For Pound bears, there is equal optimism. Inflation has retreated from the red line zone of 3%, and that is typically associated with decreased urgency to raise the Bank Rate. The dissenting voices in the MPC include Ian McCafferty and Michael Saunders, but it remains to be seen whether Andrew Haldane will vote to pull the trigger. It has been 10 years since the Bank of England raised interest rates, and most projections indicate this being an unlikely scenario. Currently, the GBP/USD pair is trading well above its 50-day moving average of 1.290, and its 200-day moving average of 1.260. Short-term bulls dominate the scene.