What is the impact of an increase in minimum wage? 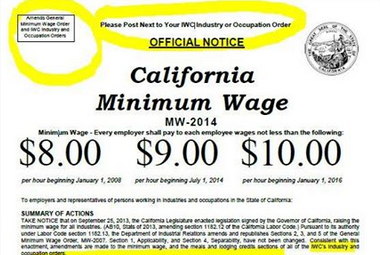 This is one of the constantly trending topics in economics; should we raise the minimum wage?

This will be a brief look at some of the pros and cons- this will be updated with more cases for and against as time goes on and more recent, relevant research is added. If you know of a resource that we should include, but we haven’t, let us know on Facebook or Twitter and we will be sure to investigate!

Paying the poorest people more will make them better off. Twenty-one states are raising their minimum wages in 2015 (the Federal minimum is $7.25/hour, which is observed in 29 states), and seem to agree.

By paying people more, they have more buying power, can spend more, and thus help support more local businesses through an increase in demand for consumer goods. As this increase in demand takes affect, the economy as a whole grows because of it.

Paying people more for their work makes them more likely to stick around, reducing turnover costs. At first this might not seem like much, but at McDonalds they estimate that for every worker that quits, it costs over $4,500 to replace them, this amount is determined both by the costs of advertising the job and attracting new workers, staffing the HR department to process applications and do interviews, the time lost between when the last worker leaves and the new one starts, the loss of productivity for other staff while time is taken to train the new worker, and the equipment, uniforms, and tools that need to be provided to all new employees.

Franchises have a turnover rate of over 90%; more than 9 out of 10 employees who start in a year leave their job that same year, so that $4,500 is already considered part of the “cost” of hiring a new worker (since they assume they will leave earlier than later). Other studies have shown that every 10% increase in wages leads to a 2.2% lower turnover rate, since workers who earn more are more likely to keep their jobs.

Another study has shown that a jump to a $15 minimum wage would increase the cost of a Big Mac by about 17 cents. Most people argue that this is pretty small potatoes, since most change less than a quarter is dropped in a couch and forgotten about, so proponents of a higher minimum wage argue the price increase would be negligable to the average consumer, and not be a huge dent to overall demand.

Opponents of a high minimum wage also point to the high turnover rate at minimum-wage positions as not necessarily a negative; they argue that if the minimum wage is too high, it works as a disincentive to people acquiring new skills or getting better jobs; if you can afford a small apartment and all your bills on the absolute minimum wage, they worry too many people would “take up the offer” and not continue to seek better positions, which are both better for the worker and more productive for society.

Think of it this way; how much a person is paid is usually determined by the labor market; it is a function of the value of their output and the quality of the work someone else would do if paid less. Raising the minimum wage does not change the value of a worker’s output, so since the actual cost of getting the same output increases for a company, they will produce less of it. This would lead to a decrease in total output, and shrinkage in the economy as a whole.

From a business’s perspective, the worry that added costs in labor need to be taken from somewhere else; the same study that suggested that Big Macs could raise in price by 17 cents also suggested that the size of the sandwich could shrink somewhere between 12 and 70 percent.

While that might not sound like such a bad thing to health food enthusiasts, the ripple effect of that huge chunk of beef now not appearing in a burger, which is a huge blow to all the suppliers of the products being prepared and sold by minimum wage employees. From the ranchers that supply beef, to the shipping and distribution companies that deliver it to the stores, and the thousands of other suppliers involved in the production of the products in multi-billion dollar companies, this ripple can add up fast.

We have used McDonalds as the primary example so far, but they are really not a very good example in the grand scheme of things (in fact, McDonalds pays almost all employees well above the minimum wage, plus benefits, in all corporate-run stores, but they don’t make the wage rules at their franchises). Most minimum wage jobs are less “visible” than the uniformed ‘team members’ at a fast food chain, and range everywhere from stockers at retail stores, call center staffers (both customer service and sales), janitors and cleaners, window washers, and just about everything else you might not really think about day to day but still needs to get done.

This means that somewhere down the line, with every product or service you see, use, or consume, someone paid minimum wage was probably involved in getting it to you. Someone down the line from them probably was too. It might not be possible to calculate the full affect on prices that a raise of minimum wage will do, but you can be sure that it will be a lot wider spread than sandwiches.

Both of these arguments have stengths and weaknesses, we will examine both as this week continues. Stay tuned!