What Is The Business Cycle?

The Business Cycle is the broad, over-stretching cycle of expansion and recession in an economy.

The Business Cycle is concerned with many things – unemployment, industrial expansion, inflation rates, but the most important indicator is GDP (Gross Domestic Product) growth. Below you can see a graph of the GDP growth rate in the United States since 1946 – the grey bars highlight periods of a recession.

The Business Cycle can also be thought of as how Real GDP moves above and below its Potential Levels.

What Is Real GDP?

Economics In Action!
The most common way to measure inflation is the Consumer Price Index, or CPI. But there are others! Try to find other ways to calculate inflation!

What is the Potential Level of GDP?

The “Potential Level” of GDP is the total output an economy can sustainably produce in a year. This is the potential output if every laborer is using their skills the most efficiently, with businesses using their capital goods to the best of their design at the current levels of technology, and public institutions are operating at their peak efficiency. Every time workers learn new skills, technology increases that allows us to make new goods (or the same goods but more efficiently), or changes to the government or culture take place that promote economic growth, the Potential Level of GDP increases.

Economics In Action!
It is not possible to tell if the economy is growing above the Potential Level during an expansion, but it usually becomes obvious after a crash!

It is easy to see how an economy can be running below the potential levels – if workers are not matched with jobs that make the best use of their skills, or if machines are not properly maintained, or even if the government has poor leaders that make less-than-optimal laws and policies, it will cause the Real GDP growth rate to fall below the potential level. If it falls too far below, the economy could enter a Recession. Inflation is usually low when an economy is running below its potential levels.

The economy can also run above Potential Levels. Remember – the Potential Level is based on what can be sustainably produced. This means that if current growth levels are the result of over-borrowing, or asset bubbles, output might actually be growing at a higher-than-sustainable rate. Economies very often run above their potential levels for short periods of time with no problems, but going too far above for too long can result in a crash. Inflation is usually higher when the economy is running above its potential, which serves to bring the Real GDP back down to its potential levels. 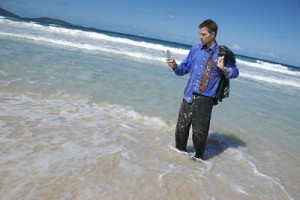 Most of the time, the economy is an “Expansion” phase. This does not mean everyone is doing well – even during very strong expansions, the unemployment rate usually stays around 5% (meaning 1 out of every 20 people who wants a job can’t find one), with the underemployment rate (people who are working part-time but want a better job) is usually much higher.

What an Expansion does mean is that new jobs are being created, and the total value being produced by an economy is going up. Growth also promotes growth – the more resources that are available, the more resources can be allocated towards researching new technologies and building new skills.

Recessions typically occur every 7-15 years, often following an asset bubble bursting, followed by a large loss of value in an economy. Recessions typically have higher levels of unemployment, with low or negative GDP growth. Even if GDP growth is never negative, recessions hurt. Other than GDP, the biggest indicator of a recession is a sharp decrease in consumer spending, and inflation tends to fall.

Higher unemployment rates mean that people lose their jobs, and new workers have a hard time finding their first position. Losses in the financial sector hurt retirement accounts and individual savings and investments, which can severely disrupt life plans. Thankfully, recessions are temporary, and the business cycle can usually move back into an expansion phase fairly quickly.