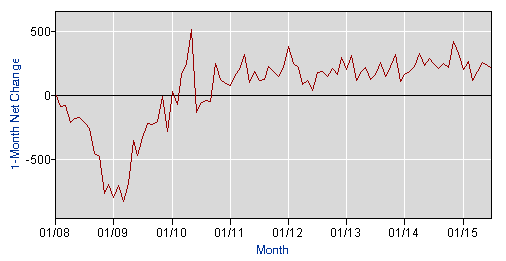 Based on the latest reports from the US Department of Labor, over 215,000 jobs were added in July, following a 230,000 increase in June. Despite the gloom-and-doom in the commodities market (especially oil and gold), hiring across the entire economy has been growing at a fairly stable pace over the last 5 years as the overall economy continues to grow.

The continued strong hiring numbers indicates that companies expect the growth to continue; companies only hire more workers when they estimate continued increases in demand, and the bright future outlook is good both for companies and workers looking to earn more.

The increase in payroll employment was not matched with a decrease in unemployment, however (the unemployment rate remains at 5.3%, unchanged from June). This can mean one of two things: either people who were previously not looking for a job have now started looking because they think prospects are better, or people who were already working part-time or for very low wages have “upsold” into better jobs with higher salaries. Either way, it is good news for the average American worker.